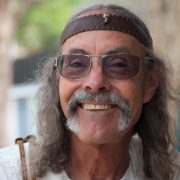 Gregory Lincoln was born in 1952 in Phoenix, Arizona. He attended Clark University In Worcester, Massachusetts; graduating with an A. B. in History in 1974. He obtained a B. F. A. in Painting from the Laguna Beach School of Art (now Laguna College of Art and Design) in 1982 and in 1985 earned a Masters of Fine Arts Degree in Painting from Claremont Graduate School (now Claremont Graduate University) in Claremont California. He has shown in numerous Art Shows in Southern California and has also had his Art Work shown in other States including Texas, Arizona, Washington State, and Hawai’i. He has spent most of his Art career in Laguna Beach, California and has regularly exhibited in the Sawdust Art Festival from 1991-1999 and from 2007 to the present. From 1999-2005 he lived and worked in Maui showing primarily at the Lahaina Town Courthouse until his return to Laguna Beach. His Artwork consists mainly of Acrylic Paintings on his own self-stretched canvases and Glassworks…mainly Hearts♥️…made at the Sawdust Art Festival.