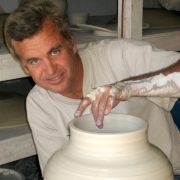 Mike grew up in picturesque Laguna Beach, California surrounded by artistic influence. He has been showing and selling his pottery since age 16, when he first exhibited at the Sawdust Festival. Encouraged by scholarships and awards, he pursued ceramics as his profession. He focused on Raku while at San Diego State University and the Art Institute of Southern California. Mike’s work is individually thrown.  He formulates his own glazes and relies mostly on instinct during firings.  The spontaneity of raku, where earth, fire and nature meet, makes each piece one of a kind.  Mike is a driven potter, and he spends countless hours creating at his studio.  His other passion is the beach, where he is an avid surfer and volleyball player.