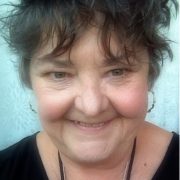 As a child of the 60s in Northern California, Sheryl Holt Eberhardt began her artistic musings by knotting intricate macramé belts and accessories for sale locally through trendy boutiques.  In the 70s, after spending time on the East Coast exposed to the rich architectural history and antiques there, she was inspired to design and create stained and leaded glass art. With the birth of her daughter, she moved back to California, where her skills at sewing and textile arts came to the forefront.

And then, an unexpected passion surfaced in the late 70s, when the earliest computers were launched.  Sheryl’s fascination with the potential of personal computing (and natural talent for computer language) led to a long and wild career in information technology and corporate culture, that ended, as she describes it, “…when it tried to kill me.”

After a mild cardiac event in 2007, Sheryl retired from the stressful demands of corporate information technology management. She picked up a hammer and an acetylene torch, and SH Studios was conceived. Through coursework, deconstructing pieces she admired and extensive experimentation, she honed her skills as a metal-smith. She works daily in her studio, at the 1950s jeweler’s bench recently acquired from the estate of a great-uncle who was a master jeweler in Marin County. Sheryl’s jewelry designs are inspired by the organic beauty found in her Laguna Beach surroundings and influenced by the clean geometrics of motherboards and circuitry.

“Gratefully, ‘Because I could not stop for death…’ I’ve learned, and am still discovering, the art and craft of metal-smithing and jewelry fabrication. Inspired by nature and thrilled by fire, my work is ever evolving and usually requires lots of torch work and much hammering!  I feel lucky, to be doing something every day that presents interesting challenges, and provides me with one of life’s pleasures…creating something with my own hands.”